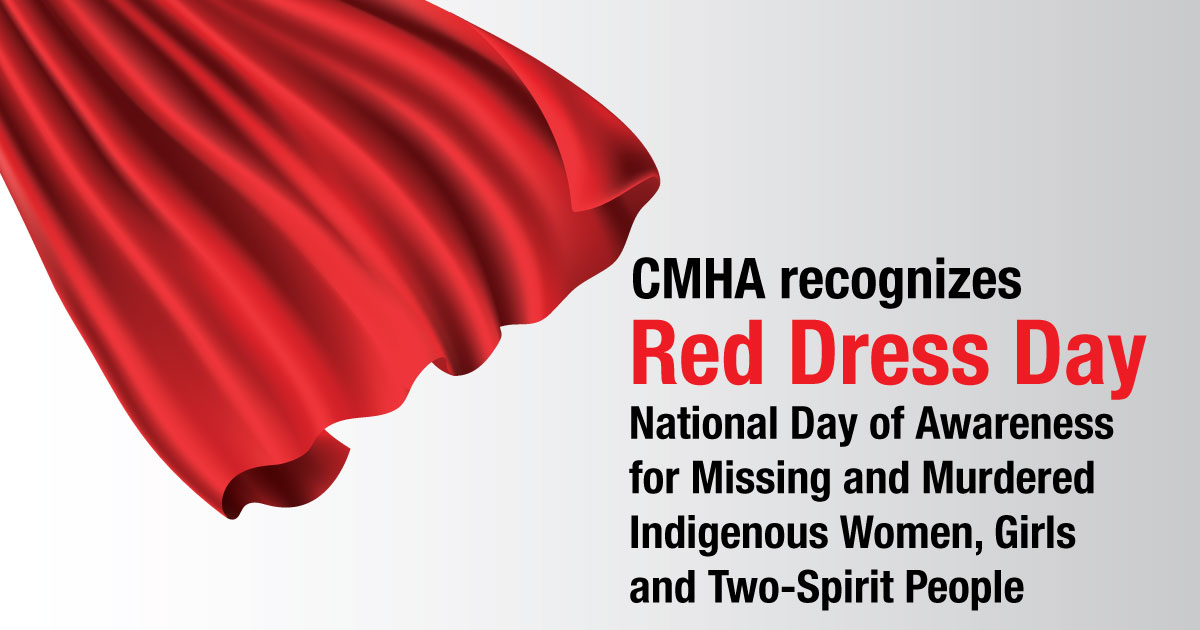 Content warning: This message refers to colonial and gender-based violence.

CMHA Peel Dufferin recognizes today, May 5, as the National Day of Awareness for Missing and Murdered Indigenous Women, Girls and Two-Spirit People (MMIWG2S) in Canada, also known as #RedDressDay. Today is a day to honour and remember the Indigenous women, girls and two-spirit people who have lost their lives to colonial and gender-based violence in Canada, express support for grieving families and communities, and take action to end violence against Indigenous women, girls and two-spirit people.

According to a 2021 report by the RCMP, 1,017 women and girls identified as Indigenous were murdered between 1980 and 2012, which is a homicide rate approximately 4.5 times higher than that of all other women in Canada.

Red Dress Day began as The REDress Project, the ongoing work of multidisciplinary artist of Anishinaabe and Finnish background, Jaime Black, as “an aesthetic response to more than 1,000 missing and murdered Aboriginal women in Canada.” The project features red dresses which are installed in public spaces to serve as a visual reminder of missing and murdered women, girls and two-spirit people. Learn more about the project here.

In May 2019, a 1,200-page report, titled Reclaiming Power and Place: The Final Report of the National Inquiry into Missing and Murdered Indigenous Women and Girls, was released by the National Inquiry on Missing and Murdered Indigenous Women and Girls (MMIWG). It outlines 231 individual calls for justice directed at governments, institutions, social service providers, industries and all Canadians. According to the inquiry website, the report “reveals that persistent and deliberate human- and Indigenous-rights violations and abuses are the root cause behind Canada’s staggering rates of violence against Indigenous women, girls and 2SLGBTQQIA people.”

To view the report and its recommendations, visit https://www.mmiwg-ffada.ca/final-report/.

This day may be triggering for some people. Call 1-844-413-6649 to access an independent, national, toll-free support call line available for anyone who requires assistance, free of charge, 24/7. You can also visit the Hope for Wellness Helpline and Chat Counselling Service for mental health and crisis intervention for Indigenous people: https://hopeforwellness.ca/home.html

For more information on MMIWG2S and violence prevention, visit the Native Women’s Association of Canada’s website.